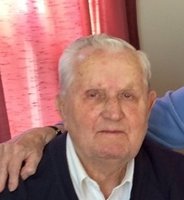 We are saddened to announce the death of William MacGillivray who passed away on 24 October, 2018 in his 99th year, after a long and fulfilled life. He was born in William’s Point on July 12th, 1920 to the late Angus A. and Catherine (Cassie MacLean) MacGillivray. He attended Morrison School and, in 1939, he joined the Canadian Army; in 1941 he was sent overseas where he saw action in England, Italy, Belgium and Germany. He took part in the Liberation of Holland and consequently was awarded The Dutch Medal of Remembrance. After his discharge from the Army he returned home and eventually was employed by Canada Post from which he retired in 1983. He was a life-long member of St. Ninian’s Parish and the Royal Canadian Legion. In his younger years he enjoyed hunting, fishing and tending his garden. As well, he enjoyed playing cards, darts and bowling. In his later years he enjoyed reading but, above all, his daily drives to his beloved William’s Point.

Family was an integrate part of Bill’s life; he was a loving husband, devoted Father, Grand- Papa, and Great-Grand-Papa. He instilled in his children a strong sense of moral and social values.  He wasn’t afraid of hard work and set a great example for his family showing that a strong work ethic leads to success.

Visitation will be in MacIsaac Funeral Home, 61 Pleasant St., Antigonish on Friday, from 2-4 pm and 6:30-9:00 pm.  Funeral Mass will be celebrated in St. Ninian’s Cathedral at 11am Saturday with Rev. Donald MacGillivray presiding. Burial in the parish cemetery.  Family flowers only.  Donations may be made to The Royal Canadian Legion, St. Ninian Parish Foundation, or charity choice.