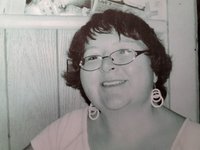 Our baby sister, Marie Bernadette Briand, formerly of Hawthorne St., passed away in the company of family at the RK MacDonald Nursing Home on January 30, 2020 after a 5 year course with fronto-temporal dementia. She was born May 10, 1960, the youngest child of the late Francis and Margaret (Powell) Briand. A very gentle and unassuming person, she was a homebody for most of her life, though she did work briefly as a clerk for the Irving offices on Bay St. in Antigonish. Marie shared her many creative talents in various ways in the community. She worked with the Girl Guides of Canada as a Sparks Leader for a number of years where she had lots of opportunity to share her skills in arts and crafts. She loved music and was a faithful member of St. Ninian’s Senior Choir for more than 20 years and performed around the community as a member of the Bonnie Blends at various functions. When they disbanded, she continued to be a part of a group that performed in many places including the RK. Marie was also a long-term member of the Legion Branch 59 Women’s Auxiliary where she participated in many of the catering activities performed. She enjoyed baking and was particularly well known for her delicious tea biscuits that formed the base of hundreds of Strawberry Shortcakes over the years. Marie was predeceased by her parents, and brother Sean. She is survived by sisters Vivian, Kathy, and Karen, sister-in-law Jackie, brother Kevin (Karen), nieces Christine, Alanna, Maureen (David ) Brown, Alisa, and Colleen (Russell Weller), nephew Kevin as well as numerous grand-nephews and two grand-nieces. Visitation will be held Monday, February 3 from 2-4 and 7-9 in MacIsaac Funeral Home, 61 Pleasant St., Antigonish. Funeral Tuesday 11 am in St. Ninian Cathedral, Rev. Donald MacGillivray presiding. Burial will be held at a later date. Family flowers only, in lieu of flowers we encourage Marie’s family and friends to make a donation to the RK MacDonald Nursing Home or charity of choice. www.MacIsaacs.ca