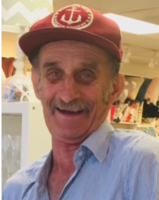 It is with heavy hearts that we regret to announce the passing of James “Jimmy” Statchook on Wednesday, August 11 at St.Martha’s Hospital, Antigonish after suffering a massive stroke at home.

James liked to be on the go and was always looking for a way to lend a hand.  He worked hard and was proud to give back to the community that supported him.  Usually not too far from McInnis’ Barbershop during daylight hours, if it happened on Main Street - Jimmy knew at least some of the details and was ready to give you his opinion on the rest!

James grew up like he lived, on the move, from Arisaig to Springfield, until settling permanently in downtown Antigonish.  He often spoke about his childhood in Arisaig and memories of being chased by the bull in the pen next to the schoolyard.  No patience for BS after that, his favourite four-legged animal was always the next dog he met, but none held a candle to his Quinn.  James rarely missed a weekend walk with his girl, often taking her on weekday afternoons when his schedule allowed. She always returned well brushed and with a belly full of treats.

Jimmy loved to work the soil of any garden (he was especially proud of his sunflowers) and fancied himself a rhubarb whisperer, proud to supply his friends with any yields he had.

James is survived by his brother, Donnie (Elaine) and their children, Jeanie (Todd) Robertson, Joe (Stephanie) and Dave (Tamara) and his nephews, Colin (Madison)Robertson, Liam and Neil Morris Statchook, Ashton and Felix Statchook and favorite niece, Madelaine Robertson -and his dog Quinn.

His sister, Carol Marie in Ontario and half brother Eddie Hartley, Halifax. He was predeceased by his parents, Elizabeth Peart and William Statchook, his foster parents Maurice and Gwen Feltmate and grandparents, Clifford and Vi Pearl.