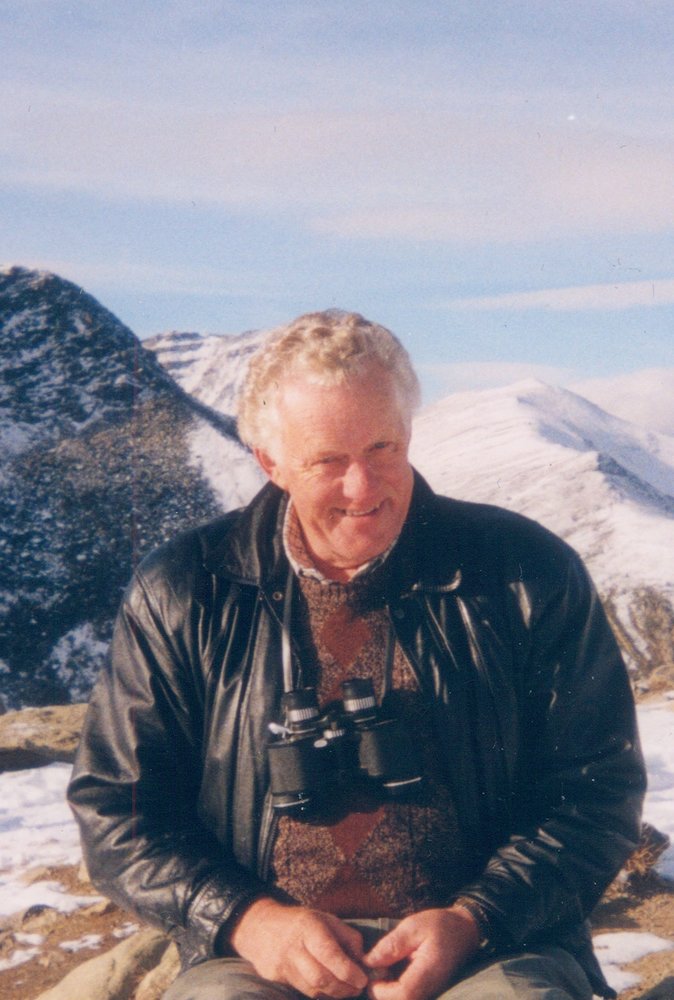 Robert Bernard Neary, 79, slipped away peacefully surrounded by family on October 7, 2018 at the RK MacDonald Nursing home Antigonish, Nova Scotia. Our Hearts are heavy for the loss of our loving husband, Father, Grandfather, brother and friend to so many. Born April 7, 1939, he was the son of the late Miriam (Hanrahan) and Ralph Neary of Fairmont, Antigonish Co. In his younger years he trained with the Reserve Army from 1949-1951. He apprenticed with Gottschall Painting and Drywall to learn his trade and spent most of his work life as a drywall taper and painter. He took great pride in everything he did. Bob liked to do woodworking and could lay his hands to most trades. He also liked trapping, hunting with his hounds, and fishing. He and his wife Elizabeth enjoyed going to dances and ceilidhs. He was happiest in his woodlot shearing his Christmas Trees, harvesting firewood and continuously keeping an eye out for “Birds Eye Maple” for which he found a tree to provide enough flooring for his living room which he was so proud of. He would fondly tell stories of his younger days lumbering with horses along with some of his brothers, and father to assist in providing for a very large family and farm. He loved a good tug of war pull, both as a puller, and a spectator, and passed his passion onto his children and grandchildren. He will be fondly remembered for his sense of humour, jokes and carrying on, his hearty laugh and bear hugs. There are so many things that could be said about Bob but he will be remembered most for his kindness, his gracious manner, bravery and courage during times of ill health and adversity. He had a positive attitude even in his final days. He is survived by and sorely missed by his devoted wife Elizabeth (Burns); son Robert, his wife Terry and their son Justin (Melissa) Fairmont Road; Daughter Tracy, her husband Lloyd Simmonds and their son Isaac, Dartmouth; daughter Cathy and her husband Chris Currie and their children Delainy and Ashton, Edmonton, and son Jim (Jodie) Calgary. Also survived by brothers: Jim Neary Fairmont, Frances (Donna) Neary, Fairmont, David (Patsy) Neary, Fairmont, Joe (Marian) Neary, Cloverville Patrick, (Eileen) Neary, Fairmont, Jerome (Maria) Neary, Georgeville and sisters: Beatrice Campbell, Ontario, Florence Smith, Ontario Margaret MacDonald, Fairmont, Evelyn Cameron, Cloverville, Eleanor (Bunny) Kalin, Saskatchewan, Patsy (Jim) MacPhie, Cape George, Ellen Parsons, Lloydminster, Brenda ( Bernie) Heffernan, Malignant Cove, Dorothy Manship (Sydney), and numerous nieces, nephews and cousins. Besides his parents he was predeceased by his brother Eugene and infant brother Howard Bernard, sister-in-law Janet Neary, brothers-in-law Wally Campbell, Bill Smith, Francis MacDonald, David Kalin and Stan Parsons. Visitation will be 2-4 and 7-9 pm Wednesday, October 10 in MacIsaac Funeral Home, 61 Pleasant Street, Antigonish. Funeral Mass 11:00 am Thursday, October 11 in St. Ninian’s Cathedral, Rev. Donald MacGillivray presiding. Donations may be made to the R.K MacDonald Nursing Home Foundation, Lights of Love in Memory of Bob Neary.