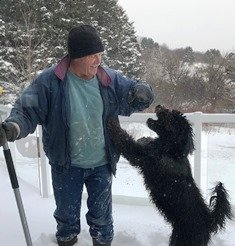 John Robert (Bob) Caughey, age 70 of Lakevale died at home on Saturday, December 15, 2018. Born in Pembroke Ontario, Bob was the eldest child of the late Cecelia and John Christopher Caughey. A rebel from an early age, he “quit” school at recess the first day of grade 1, went home and demanded to go to the French School. He must have known his future as his bilingual education prepared him for a combined 45 year career as an MP in the Canadian Forces and later as a member of the Royal Canadian Mounted Police. Retiring 5 years ago, Bob was free to explore the world by train, plane and boat and he did - travelling to Germany, Austria, Scotland, England, Barbados, The Rhine, The Danube, the Caribbean, Alaska and many places in-between with his most recent travels to the Norwegian Fjords and his beloved ancestral home of Ireland. An avid hunter and fisherman, Bob only travelled in non-sporting seasons. He was not happy until a buck was tagged and his sea bass sizzling in the frying pan. As a father to Daniel and Lori, Bob saw the inside of many hockey arenas, baseball fields and 4H barns. Not content to simply observe, Bob became their lifelong coach - coaching Daniel through hockey and ball and Lori with her goats, lambs and puppy classes

He is survived by his soul mate and wife Terry Penny, her children Lindsey (Kris Gardham) Mac Gillivray, Toronto, and David (Kristina) MacGillivray, Lakevale, his daughter Victoria (Darcy) Blanchard, NFLD, their son Tommy and his two children, his son Daniel (Megan Ryan) Caughey, Stittsville, ON and his daughter Lori (Rev Andrew) MacDonald, Whycocomagh, and their beautiful daughters Natalie and Bridget, his sister Jane (Harrison) Farrell, and brother David (Karen) Caughey, both of Pembroke, ON, his sister-in-law Diane Caughey, Pembroke, nieces and nephews Kevin, Ian, Christopher and Mandy.  He is also survived by his adopted Penny family; his father-in-law Gordon Penny, Antigonish, sisters-in law Patricia, Susan and Anne Marie Penny and brothers-in-law Michael and Mark Penny. He was predeceased by his brother Sammy.

The wake will be held on Wednesday, December 19 from 5-8pm in MacIsaac Funeral Home, 61 Pleasant St, Antigonish with Funeral Mass on Thursday, December 20 at 10:00 am in St Columba Church, Lakevale. Fr Andrew Boyd presiding.