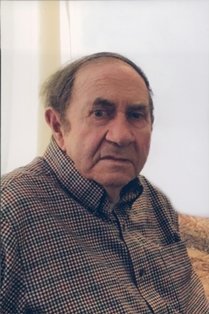 We are saddened to announce the passing of David Ambrose O'Connor, 83, of Croft peacefully June 21, 2019 surrounded by his family at the RK MacDonald Nursing Home Antigonish.  Born March 25, 1936, he was the son of the late Patrick and Elizabeth (MacGillivray) O’Connor.

He is survived by his sister Mary Margret (O’Connor) Grace, 8 nieces and 3 nephews.   He was predeceased by his parents, his bother-in law. Leonard Grace, and family friend Joe Welsh.

Ambrose was a man of great faith, who to his dying breath, took comfort in the grace of God. His faith allowed him to know and love his community of Croft. This knowing was a blessing to the community at large, because of Ambrose’s ability to recall dates of birth, death and anniversaries.  If you forgot, Ambrose never did.

He was a farmer all his life in Croft. His love of animals came in handy with both his cattle and horses.  His love of nature made the harvest one of his favorites.

Ambrose always enjoyed a good game of auction or 45’s and was considered quite the “card shark” at the RK MacDonald.  During his short stay there he made a number of great friends.

Never one to shy away from a good conversation even on politics, Ambrose was a devote Tory and was always available to work the polls. He was always an active Toronto Maple Leaf fan and had great hopes for them each and every year.

Visitation to take place Monday June 24, from  2-4,and  7-9 pm in  MacIsaac Funeral Home, 61Pleasant Street, Antigonish.  Funeral mass Tuesday, June 25, at 10 am in St Andrews Church, St Andrews Nova Scotia.  Burial in the parish cemetery.  Reception to follow at the Community Centre. Donations may be made to the St Andrews Cemetery Fund. www.MacIsaacs.ca

Share Your Memory of
Ambrose
Upload Your Memory View All Memories
Be the first to upload a memory!
Share A Memory
Plant a Tree