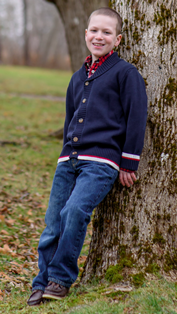 It is with profound sadness and a deep sense of loss that we announce the passing of our sweet boy, Oliver Joseph Smith, affectionately known as Smitty, on June 27, 2019, one day after his 12th birthday.

Oliver, a grade 6 student at St. Andrew Junior School, excelled academically, loved to participate in sports and play with his friends. He was deeply committed to his school community, was a champion for those less fortunate than himself and always promoted fair play. Oliver worked on the concept of the GaGa ball pit for the new playground, a game he learned to love during his two summers at Brigadoon Village’s Camp Goodtimes. His favourite sport was hockey and he was a member of the Antigonish PeeWee AAA’s for the 2018/19 season. Although Oliver never played a game with his team, he participated in skill sessions when able and attended home and away games, cheering proudly for his teammates. He loved the Toronto Maple Leafs and rarely missed an opportunity to watch them on TV. His dream of seeing the Leafs play and meeting his favourite player, Mitch Marner, was granted in a wish by the Childrens' Wish Foundation in March 2018. Oliver served as a source of inspiration and resilience for the StFXU women and men hockey teams during their 2019 playoff season. He had the opportunity of travelling to Lethbridge for the USports Championship with the XMen, delivering their starting lineup and pregame speeches,  proving that hard work and determination always pays off, a motto he lived each day of his short life. Because of these qualities, Oliver received several awards, including Antigonish Bulldog of the Year 2017, USports Bronze medalist with XMen hockey and the StFX Athletics X-Ceptional Award 2019. Oliver was a special selection in the 2019 QMJHL entry draft by the Moncton Wildcats recognized for his actions on and off the ice demonstrating his “courage, teamwork and passion for hockey”.

Besides hockey, he loved to build LEGO, play softball, swim, bike, hike, canoe and camp with his family. Oliver loved learning to play the drums, especially the Djembe with special friend and teacher Sean. He was a proud supporter of his sisters and loved to watch them succeed in their activities. Oliver loved animals, especially the family dog, Spencer, with whom he shared his favourite chair during movie nights and hockey games. He was an altar server at St Ninians Cathedral and loved to participate in mass and learn from others who served.

Oliver is the creator of OllieBots, a project initiated in November 2017 to bring awareness to his cancer, Ewings Sarcoma, raising money for Ewings Cancer Foundation Endowment Fund and providing financial support to those local families affected by paediatric cancer. He was instrumental in the construction and sale of over 2000 OllieBots,  resulting in over $35,000 being donated to ECF. His family and friends will continue this project to honour his legacy.

The family is eternally grateful to Dr. Jane Anne Howard for her unwavering support and care; Dr. Conrad Fernandez, family care nurse Sarah Ross and the oncology team at the IWK, especially the nurses on 6 Link; the staff of St. Martha's Oncology Unit, especially nurses Jeannie and Donna and special friend Colleen as well as Palliative Care teams at St Martha’s and the IWK. Thank you for your care, concern and compassion during Oliver’s journey with Ewings Sarcoma.

He will rest on Sunday, June 30 from 2-4 and 7-9 pm in MacIsaac Funeral Home, 61 Pleasant Street, Antigonish. Funeral Mass Monday, July 1 at 11:00 am in St. Ninian Cathedral, Rev. Donald MacGillivray presiding. In lieu of flowers, donations may be made to Ewings Cancer Foundation Endowment Fund.

Share Your Memory of
Oliver
Upload Your Memory View All Memories
Be the first to upload a memory!
Share A Memory
Plant a Tree