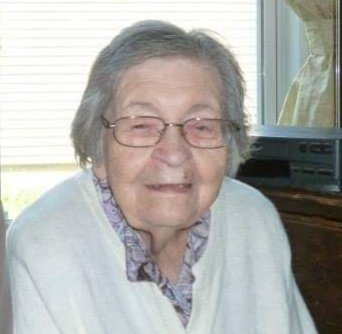 We are saddened to announce the passing of Barbara N. Kennedy (nee Tramble), 103 years young, a resident of the R.K. MacDonald Nursing Home.

Barbara was the daughter of Walter W. and Mary Ann (nee Purcell) Tramble and the last surviving of 5 brothers and 4 sisters.

Predeceased by her husband,  Joseph A. Kennedy. She is survived by one son, Walter (Linda) of Regina SK; two granddaughters, Barbara of Regina SK, and Ashley (Chris) of Calgary AB; one grandson, Michael of Antigonish; and one great grandson, Jase.

Barbara worked at St. F.X. University for many years as Secretary to Father Brewer, Head Librarian of Angus. L. MacDonald Library.  She had also worked in Montreal where she received her formal secretarial training. In her early years she worked for N.S.P.C. in both Antigonish and New Glasgow.

After retiring, she became involved in Club 60; including organization and fundraising for the construction of the current Club 60 building on Main Street. Barbara enjoyed many activities to keep busy; including card plays, bridge, cribbage, gardening, pickling, baking, sewing and knitting. She will be greatly missed and always loved.

Visitation will be held on Monday from 2-4 and 7-9 in MacIsaac Funeral Home, 61 Pleasant St., Funeral Mass at 11:00 am on Tuesday in St. Ninian Cathedral, Rev. Donald MacGillivray presiding. Burial in the parish cemetery. In lieu of flowers, donations may be made to the R. K. Macdonald Nursing Home Corporation. www.MacIsaacs.ca

Share Your Memory of
Barbara
Upload Your Memory View All Memories
Be the first to upload a memory!
Share A Memory
Plant a Tree