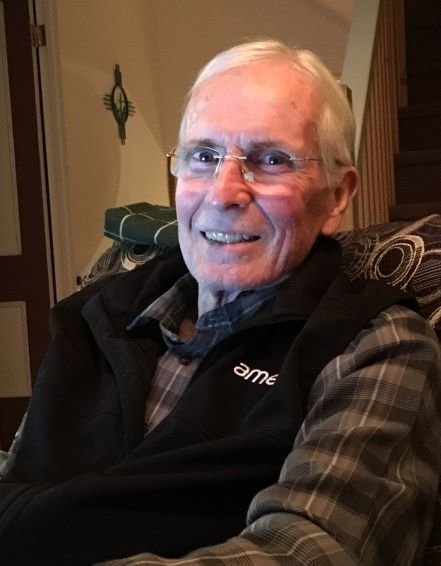 Beaton, Michael David of South Side Harbour, Antigonish passed away on October 11, 2019. Born in Antigonish he was the son of the late Charles and Dorothy (Shelley) Beaton and big brother to Cyril. In his youth he was an avid hockey fan and goal tender for many local hockey teams. He also had a passion for skiing that took him throughout Canada, the USA and Europe. As a graduate of St. Francis Xavier University he obtained his BA (1971) and B.Ed (1976), he taught for almost 20 years in the former Guysborough High School, followed by St. Mary’s High School and Antigonish Regional High School. His popularity as a teacher was evidenced by the fact that many of his students stayed in touch after graduation. His obsession with air cooled engines, starting with VW, Porsches, and Harley Davidson motorcycles, led to having friends around the continent. Travelling in his motorhome with his wife and best friend, Lorraine, further fulfilled his love of travel and camaraderie. He was a founding member of the GMC Eastern States Motorhome Club, a member of GMC International and the Nor’Easter Motorhome Club and a Master Mason at Masonic Sunrise Lodge 116. Following his retirement in 2004, he was able to spend lengthy periods at his New Mexico Ranchette. More recently he was lovingly known as Grandpa (G-Pa) to his five grandchildren Logan, Abby, Emma, Lucas and Sam. He will be sadly missed by all who knew him. He is survived by his wife Lorraine, children Christina (Sheldon) Chisholm, Jonathan (Karen) Jadot, Sarah (Joe McKenna) Jadot; brother Cyril (Maureen); many nephews and nieces.  Predeceased by his father, mother and nephew Mike Beaton. Visitation will be at MacIsaac Funeral Home, Antigonish on Thursday 2-4 PM and 7-9 PM. Funeral mass 11 AM, Friday in St Ninian's Cathedral, Antigonish, Father Rev. Donald MacGillivray presiding. Donations in lieu of flowers can be made to Sunrise Masonic Lodge #116 Antigonish. www.MacIsaacs.ca

Life has changed, not ended!

Share Your Memory of
Michael
Upload Your Memory View All Memories
Be the first to upload a memory!
Share A Memory
Plant a Tree