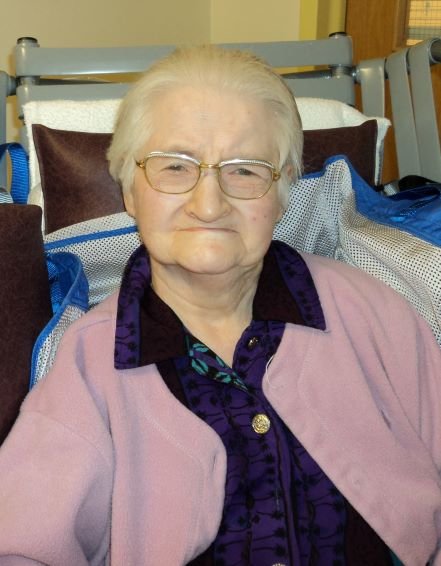 Kyte, Sister Ethel, formerly Sister Mary of Fatima, 97, a Sister of St. Martha of Antigonish, died at Mary’s Court on Wednesday, October 30, 2019, in the 69th year of her religious life.

Born in River Tillard, Nova Scotia, Sister Ethel was the youngest of six children of the late Michael and Christina (MacIntosh) Kyte.

Sister entered the Congregation of the Sisters of St. Martha on May 25, 1948, pronounced her first vows on February 15, 1950 and her perpetual profession of vows on August 15, 1954.  Prior to entering the congregation, Sister worked as a nurse for three years, having graduated from St. Martha’s Hospital School of Nursing in 1944.

In 1959, Sister Ethel obtained a Post Graduate Diploma in Ward Administration and Teaching from Dalhousie University, and in 1972 graduated with a Bachelor of Science Degree in Nursing from Mount Saint Vincent University.

After her retirement in 1980, Sister resided at Bethany, our former Motherhouse, where she assisted with various duties and services.  In 2005, due to her declining health she moved to Extended Care in Bethany, and in 2018, courageously made the move into Mary’s Place, the Enhanced Care area of Parkland Antigonish.

Sister Ethel spent the last few years of her life as mission, offering prayers for the needs of the world, near and far.  Through her years of declining health and suffering she maintained an interest in the lives of those around her.  She was known to be a wonderful nurse and very kind.

Sister Ethel was the last surviving member of her immediate family.  Besides her parents she was predeceased by brothers, Jimmie, and Charles, half brother, Edmund MacIsaac, and by half sisters: Mary Pringle, Hilda Morrison and Hilda’s twin, Mabel, who died in infancy.  She is survived by many nieces and nephews.

Arrangements are under the direction of MacIsaac Funeral Home of Antigonish. www.MacIsaacs.ca

Share Your Memory of
Sister Ethel
Upload Your Memory View All Memories
Be the first to upload a memory!
Share A Memory
Plant a Tree