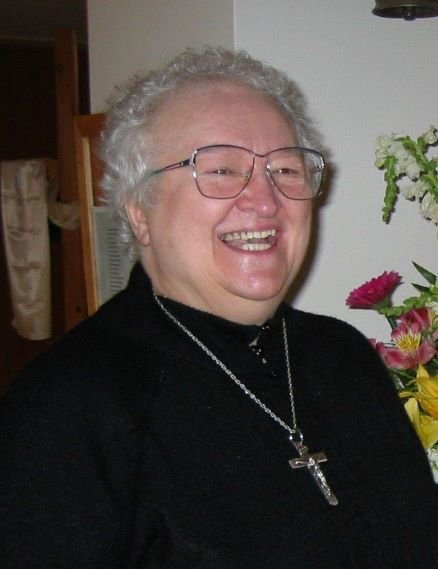 Byrne: Sister Theresa, formerly Sister Jean Patrice, 88, a Sister of St. Martha of Antigonish, died in St. Martha’s Hospital, Antigonish on the 5th of November 2019 in the 61st year of her Religious Life.

Born in Cornerbrook, Newfoundland, Sister Theresa was the tenth of thirteen children of the late John Joseph and Mary Ann (McCarthy) Byrne.

Sister entered the Congregation of the Sisters of St. Martha on February 15, 1956, pronounced her first vows on February 15, 1958 and her perpetual profession of vows on August 15, 1961. Prior to entering the Congregation, Sister Theresa had obtained a diploma course in typing, shorthand and bookkeeping and was employed at Harmon Air Force Base, Stephenville, Newfoundland for four years.

Sister Theresa was a prayerful person who participated in spiritual renewals at Pickering, Ontario, St. Stephen Priory, Massachusetts, and Jesuit Centre, Guelph, Ontario. She was also known for her great sense of humour and storytelling.

Sister Theresa is survived by one sister Josephine Blocker of Rapid City, South Dakota.   Besides her parents she was predeceased by sisters, Winnifred, Veronica Varuska, Mary Ann, Elaine, Dorothy Ryan and Alice and brothers John, and William. Margaret, Florence and Francis died in infancy. She is survived by many loving nieces and nephews and great nieces and nephews.

The remains will be resting in Martha Place, Parkland Antigonish, beginning Friday, November 8th at 1:15 pm where a celebration of vigil will be held on the same day at 7:00 pm.  Liturgy of Christian burial will take place on Saturday, November 9th at 1:30 pm in St. Martha Chapel, Parkland, Antigonish. Burial in the Bethany Cemetery.

Arrangements are under the direction of MacIsaac Funeral Home of Antigonish.

Share Your Memory of
Sister Theresa
Upload Your Memory View All Memories
Be the first to upload a memory!
Share A Memory
Plant a Tree