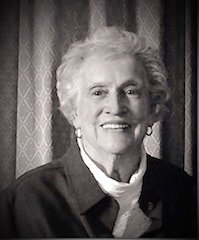 Grace "Hilda" MacGillivray (Keay) passed away suddenly in St. Martha's Regional Hospital on April 5, 2020 in her 96th year, after a life well lived. She was born in Antigonish on December 19, 1924 to the late Joseph and Evangeline (Melanson) Keay. She grew up in the village of Havre Boucher. Her stories about going to school, daily activities, life during "The Great Depression" will be forever remembered.

At the onset of WWII, Hilda met and married the love of her life, William (Bill) MacGillivray from William's Point. Shortly after, Bill enlisted in the army and was eventually sent overseas after his basic training. Hilda went to Toronto, attended The Radio College of Canada and successfully completed the course of study in Commerical Radio Operating. During the latter part of the war she worked in Ottawa and Shediac, NB in war time radio rooms. After the war they settled in Antigonish and raised a family of ten children. Hilda was a devout Roman Catholic whose everyday life reflected the true values of Christianity. She was a life long member of the CWL, the Legion of Mary and a founding member of the Opportunity Shop. Throughout most of her life Hilda was an avid gardener, especially when it came to roses and flowering plants. With Bill they produced many years of vegetables and fruits which became pickles, chows and preserves. She was an avid reader, and kept daily logs and journals which chronicled life at her dear 61 Fatima St. Crosswords and jigsaw puzzles were always on the go. Her creativity and resourcefulness were shown in the knitted and sewn outfits made for her children and grandchildren. With the dawn of the computer age she jumped in and embraced the challenge of technology right into her 95 plus years.

Family was a most important and integral part of Hilda's life. A loving wife, truly devoted mother, doting grandmother, great-grandmother and great-great-grandmother she instilled in all a true sense of moral and social values. Her unwavering faith was viable in her everyday life. She was ahead of her time in the ecological movement long before it was a social issue. Her motto was to reuse, reduce and recycle - to waste anyting was wrong! A true role model for her family and others she showed that hard work and doing your best lead to success.

Hilda was the last surviving member of her immediate family. She was predeceased by her husband of 77 years, Bill, her dear son, Scott and three grandchildren, Michael and James MacGillivray and Edward Whelan, who died in infancy, her brothers Ferdinand, Hilus, Reuben and baby Clement and her only sister Rita Munroe.

Due to the COVID-19 Pandemic there will be no public visitation. A video link to the funeral mass: https://www.youtube.com/watch?v=Gh7QuHN9ado&authuser=0.  A graveside service will be held at a later date in St. Ninian's Cemetery.

We would like to thank Dr. David Cudmore for his wonderful care and support over the years, the VON nurses and nursing staff at Parkland for their exceptional and compassionate help. As well, a huge thank you to Jack and Val Sullivan whose kindness and support will be gratefully remembered. Also to Fr. Donald MacGillivray for all his prayers and support over the years. Donations in Hilda's memory may be made to a charity of your choice. www.MacIsaacs.ca

Share Your Memory of
Hilda
Upload Your Memory View All Memories
Be the first to upload a memory!
Share A Memory
Plant a Tree