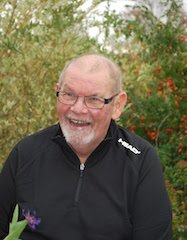 James Kevin Landry passed away peacefully in his wife’s arms on Friday, May 1st in the palliative care unit at St. Martha’s Regional Hospital after a 15 month journey walking strong with ALS (Lou Gehrig’s Disease). Kevin was born on Nov. 3rd, 1953 to parents Nick (Nicholas) and Theresa (MacDonnell) Landry. Kevin spent 46 years working for the Department of Transportation and Infrastructure Renewal, retiring this past fall. Kevin knew and plowed just about every road in the area. After making a brief stop in the stockroom at the Antigonish base, Kevin completed his career as an Equipment Instructor Inspector for the Eastern District. He also served his fellow highway workers of CUPE Local 1867 for most of his career. . Kevin was a life-long learner. He was at the heart of developing Workplace Education programs around the province for which he received many awards and recognition. Kevin always gave back to his community of St. Andrews, serving on the St. Andrews District Volunteer Fire Department for over 30 years as well as the board of directors of the St. Andrews District Community Centre. Sports were a constant in Kevin’s life. Affectionately known as JC, he could be found at the Antigonish Arena as a trainer for the Junior Bulldogs for 30 years, at the ballfield in Lower South River and working with the St. Andrews Flyers. Kevin and Tammy enjoyed many amazing summers at their cottage on Pringle Lake and trips abroad on March Break.

Besides his wonderful parents, who delighted in visiting and having a great game of cribbage, Kevin is survived by his loving wife Tammy (Cossaboom), his son Ian (Lacey), daughter Courtney (Adam Dixon), his 3 step-children, Kerrin, Keith and Kendra Duggan, sisters Betty (George Mills), Eileen (Dave Heffernan), brother Tommy and nieces Alicia, Stephaine, Lacey, Nikki, Andrea and Breanna as well as many aunts, uncles and cousins including his godmother Mary Gillis. The delight of Grampie’s eyes were his two precious grandchildren, Sadie Rae and Ethan James. Kevin was thrilled when they moved home from Alberta and moved into the family home in Meadow Green. Kevin was predeceased by his maternal and paternal grandparents and his sisters Joan Marie and Florence Michelle. With the assistance of the ALS Society of NB and NS, the Antigonish VON and the Antigonish and Area Homemakers, Kevin was able to complete all but 10 days of his ALS journey at home.

Cremation has taken place under the direction of MacIsaac Funeral Home.  A celebration of life will be announced at a later date. In lieu of flowers, memorial donations can be made to the ALS Society of NB and NS, 1000 Windmill Avenue Suite 1, Dartmouth NS B3B 1B4 to continue to support those living strong with ALS. www.MacIsaacs.ca