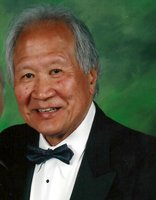 Please share a memory of Raymond to include in a keepsake book for family and friends.
View Tribute Book

Link to Pictures of Ray https://www.mckenziefuneralservice.com/memorials/raymond-wong/4213946/index.php

It is with much sadness that we announce the passing of Raymond John Wong, P.Eng., beloved Husband, Father, Grandfather, Brother and Friend, on the 14th of May 2020.

He was predeceased by his parents George & Mollie Lee, his brothers Sam, Henry, Edward, George Junior, and sister Jenny.

Ray’s parents emigrated from China. Both were required to pay a $500.00 Dollar head tax to be allowed into Canada. His mother, as a child, was sent to live with a family in Victoria. His father George, who worked in cooking camps, had connections within the Vancouver Chinese community. With their assistance, a marriage between the two was arranged.

Quoting the casket newspaper in Antigonish:

“George of Wong’s Café set local bachelors a good example when he went out to Victoria and took unto himself a wife. Mr. and Mrs. Wong arrived in Antigonish. Miss Mollie Lee was born in China. She is one of the first ladies of her race to come to Antigonish and is one of the scant half-a-dozen to be found in Nova Scotia”.

They settled in Nova Scotia, became very active in the community, and were noted for their philanthropy. The gala opening of Wong’s Café, on July 10th 1930, was under the auspices of St. Martha’s Hospital Auxiliary and the proceeds of the evening were donated to the hospital.

Ray was born the ”Middle Child of 9 siblings” so it is not surprising that he seized every opportunity and challenged life with such gusto.

He attended Morrison High School and was the Editor of the school newspaper. Ray was a leading scorer in hockey. On behalf of the graduating class of 1954, Ray delivered the Valedictorian speech at the closing ceremonies to teachers, parents and fellow class mates. He started on his engineering career with a Diploma in Engineering at St. Francis Xavier University where he received the coveted “X ring” and then graduated in Electrical Engineering from Dalhousie University in Halifax and received his “iron ring”.

Ray moved to Winnipeg in 1960 and began his career in Electrical Engineering and Lighting Design and won many Illuminating Engineering Society (IES) Awards for his designs. He loved teaching the Lighting Course to the students at the School of Architecture at the University of Manitoba.

In 1972 he moved to Vancouver and had a storied career as a principal in several electrical consulting practices until 2010. After he retired from the firms, he continued to practice his beloved profession as an independent consultant right up to the end of his life. During his career, Ray was the electrical and lighting designer of many well-known projects in BC including; the HSBC Data Center in Burnaby, the Broadway Tech Campus in Vancouver, BC Lotteries, the Vancouver Film Studios and the Bridge Film Studios as well as many HSBC retail branches. He was most proud of his contributions to Expo 86 and continued to win several more (IES) Lighting Awards for his work in BC.

Ray was born with a zest and curiosity for life and a wonderful compassionate nature. He loved and valued his family & his friends and the time spent with them. He enjoyed hosting many dinners and parties. He was passionate about good food. From phenomenal Chinese feasts or Nova Scotia inspired traditional Lobsters, be it cooking at home or organizing dinner parties at restaurants, Ray would entertain everyone by sharing his exuberant and hilarious stories.

Ray and Lynda enjoyed many happy years together travelling and exploring many countries, enjoying cruises and, in the last few years, spending the winter months in Mexico.
He became affectionately known as King Wong to his family, friends, restauranteurs and fellow hockey players. Ray had a love of sports and a passion for hockey that would last throughout his life. His fellow teammates shared this about him.

“Ray was a great athlete, but he was in his element when playing hockey. Many senior hockey players will tell you reaching 40 and qualifying to compete in the Snoopy tournaments was a golden moment and 1977 was Ray’s year. Who could have imagined, that under Ray’s leadership, it would morph into so much more than a hockey tournament!

Getting into the Charles Shultz Snoopy Senior World Hockey Tournament was like getting drafted into the NHL. Many teams tried for years to get into the tournament but, from 1977 until 2015, Ray’s team never missed.

Ray also played for many teams in the lower mainland and each team feels honored to have been in his company. He travelled to Japan 3 times with the Orient Express Team. His last tournament was at the age of 80. In the final game, the teams were tied 5-5. After a scuffle, Ray was down on the ice, in front of the opposing goalie. In true fashion, Ray got to his feet and, as the puck came right to him, he gave his shoulder a little dip causing the goalie to move. Ray shot the puck into the open side of the net, ending the game with a 6-5 Final score. It was one of the highlights of our trip to Japan”.

Ray was a long-time member of Hollyburn Country Club where he was very active in sports and coaching amateur hockey and served on the Board of Directors for many years.

Please consider a Donation to the Kidney Foundation or a Charity of your choice.

A Celebration of life will be planned post Covid-19

Share Your Memory of
Raymond
Upload Your Memory View All Memories
Be the first to upload a memory!
Share A Memory
Plant a Tree