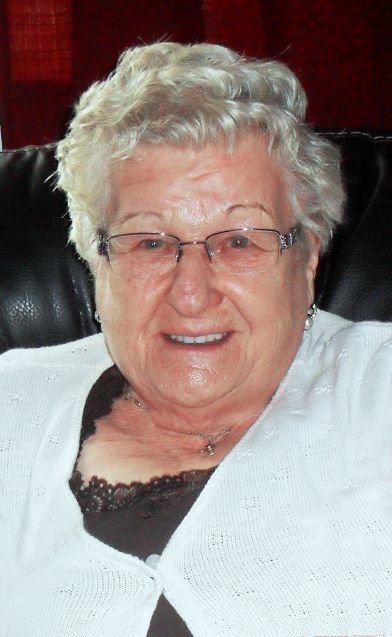 Edna Josephine (Josie) MacEachern, 93 of Livingstone's Cove and, more recently, Greenwold Manor and the Antigonish Manor, passed away peacefully on Monday, September 28th in the RK MacDonald Nursing Home - Palliative Care.  Born in Havre Boucher on January 18, 1927, she was a daughter of the late Archibald and Christina (Mahoney) MacEachern. She was the last surviving member of her immediate family.

As a nineteen year old, Josie moved to New York to begin her career. While she was home on holiday she met the love of her life, John Hugh, at a dance. It all began with an accepted proposal and they began married life in Aulds Cove. Mom was a homemaker and mother to Gerard and Bernie before moving to Livingstone’s Cove. Following this was the arrival of Winnie, Tony, Eugene and Maria. She was also honorary mom to a chosen few. In Livingstones Cove, her breadmaking skill was enjoyed by all who entered the kitchen for a visit. In the seventies, Josie started work at Bethany Motherhouse in the bakery. She then went to her chosen career as caring babysitter to the MacGillivray family in Sylvan Valley, where she would stay until the mid-nineties. Her greatest pride and joy was her family. As Nanny/Nana to a second generation fortunate enough to benefit from her love and thousands of hugs while her great-grandchildren are the third generation to experience GG’s youthful sense of joy and love. Josie loved a good crib match and loved teaching her grandchildren to play and graciously won most games; was the maker of a mountain of quilts, and knitted a multitude of mitts, sweaters, socks, hats, and dishcloths.

The family wish to thank the staff of RK Maple Ridge and the loving compassionate care of everyone in the palliative area of Maple Ridge and Martha's. Your love and respect for her dignity made such an impact on us - you are a blessing!

Visitation will be held Friday, October 2, 2020 from 2-4 and 7-9 in MacIsaac Funeral Home, 61 Pleasant St., Antigonish. COVID-19 protocols will be in place - masks are mandatory and social distancing must be followed.  Funeral Mass 10 am Saturday in St. George's Church, Georgeville, Rev. Andrew Boyd presiding. Burial in the parish cemetery. Online condolences and/or memorial donations may be made to the R.K. MacDonald Foundation - Palliative Care Unit, by visiting www.MacIsaacs.ca

Share Your Memory of
Josie
Upload Your Memory View All Memories
Be the first to upload a memory!
Share A Memory
Plant a Tree