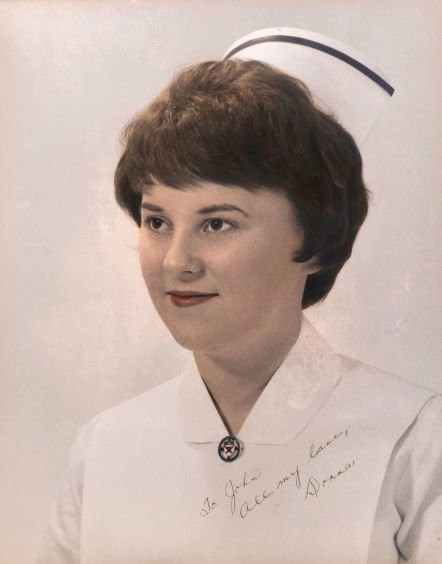 The Kennedy family of Purl Brook is deeply saddened to announce the passing of Donna Marie Kennedy on November 15, 2020, at the age of 77. On October 27, 1943, Donna was born to Edward and Catherine (MacDonald) Roop in New Glasgow, NS. She graduated from St. Martha's School of Nursing In 1964 and married John Kennedy in September 1965.

Happiest when she was busy with a project, Donna gave generously of her time to many community initiatives and organizations. She was a valued asset of the Catholic Women's League, St. Joseph's Parish, the local 4-H club, Antigonish Co. Volunteer Fire Department Auxiliary, and, of course, amateur sport.  Donna logged many hours and miles supporting her children's interests. She rarely missed a game, an event, or competition. Over the years, many of the teammates and friends of her children, referred to Donna as their second mom – she made everyone feel welcomed in our family home.

Donna loved to garden, read, camp, shark her friends at card games, and watch sunsets over Gaspereaux Lake.  She had a soft spot for her grandchildren and, during hockey playoffs, the Boston Bruins. She baked in commercial quantities.  The aroma of her cookies, pies, and cakes attracted her children and grandchildren from miles away.

She counted her St. Martha’s School of Nursing classmates among the most treasured people in her life.  Their class of ’64 annual reunions were a highlight of her summer.  Usually a modest woman, she was known to boast about her classmates remaining so close, for so many years.

The family would like to extend heartfelt thanks to the doctors and nurses at St. Martha's Hospital in Antigonish and the QEII Cancer Centre in Halifax. In particular, we would like to say thank-you for the exceptional care and consideration provided by the palliative care team at St. Martha's. They provided much comfort, dignity, and respect to Donna in her final weeks.

Donna had tremendous energy and resilience despite the physical challenges she faced.  We ask that that memorial donations be made to the Canadian Arthritis Society at arthritis.ca or by clicking on the donation link on the left.

Visitation will be held in MacIsaac Funeral Home, 61 Pleasant St., Thursday, November 19th from 6:00-8:00 PM.  Due to COVID-19 restrictions a private Funeral Mass will be held in St. Joseph’s Church at 2:00 PM on Friday, November 20. A video link of the Funeral Mass and burial will be available here on Friday evening.  A 3:00 PM outdoor committal ceremony will be held at St. Joseph's Cemetery following the Funeral Mass; this is an open event and friends and family who would like to join in remembering Donna are invited to the cemetery (Masks and social distancing are required).

6:00 pm - 8:00 pm
MacIsaac Funeral Home
61 Pleasant St
Antigonish, Nova Scotia, Canada
(902) 863-3414
COVID-19 protocols will be in place. Wearing a mask and social distancing of 2m (6 ft.) is required. Please do not attend if you are presenting with any symptoms of COVID-19 (fever, sore throat, cough, etc) or if you have travelled outside the Atlantic bubble within the last two weeks.
Need Directions?
View Map | Text Directions | Email Directions
Friday
20
November

Share Your Memory of
Donna
Upload Your Memory View All Memories
Be the first to upload a memory!
Share A Memory
Plant a Tree