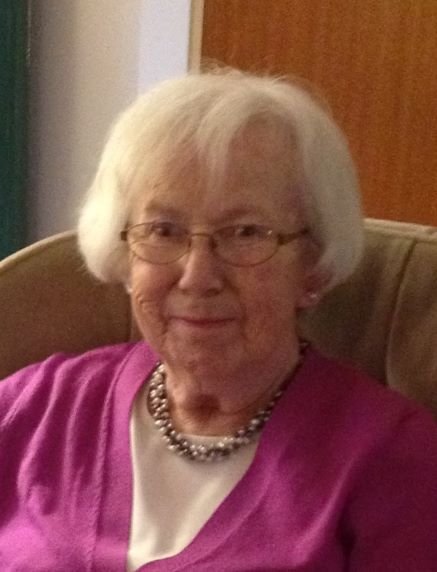 Mary grew up in Arisaig during the great depression. She was one of seven children who loved their roots and built cottages there as adults spending their summers on the Gulf shore.  She was a graduate of Mt. St. Bernard College and worked in the Bursar’s office and at the Angus L. MacDonald library at St. Francis Xavier University. In her earlier years Mary was employed at the Bank of Nova Scotia giving rise to her being known as “Mary Scotia” in a town where MacDonald is a common name.  She married Donald Barry of Antigonish in 1949.

A talented, self-taught cook, she was a voracious reader, a lover of trivia games and an astute follower of public affairs.

Mary was devoted to her family, her church and her community.  For years she gave generously of her time as a valued member of the St. Ninian’s Parish Council of the Catholic Women’s League where she held many offices, including President.  She devoted ten years as a member of the executive of both the Diocesan and Provincial CWL Councils.  She co-hosted an International Conference of Women at St.F.X. in 1983 when over 500 women from across the world came to Antigonish to participate in the World Union of Catholic Women’s Organisations.  Mary was a volunteer for the Victorian Order of Nurses, the Antigonish Food Bank and the St. Ninian Conference Society of St. Vincent de Paul, and served as a community member of the Antigonish Crime Prevention Committee.  A long-time credit union member and supporter of the Antigonish Movement, she supported and worked with her husband Donald in many of his volunteer activities (writing many of his speeches) and served as a member of St. Ninian Parish Council.  She was a strong supporter of St.F.X. University and encouraged her children to pursue studies there.

Her community contributions were recognized when she and her husband Donald jointly received two awards. In 2001 the Nova Scotia 50+ Expo presented to them a leadership award as one of ‘Nova Scotia’s Most Remarkable Seniors’. In 2016 Clan Donald Nova Scotia presented them with a ‘Clan Donald Achievement Award’ for years of service to the organization.

Visitation will be held from 2:00-5:00 pm on Sunday, December 13, 2020 in MacIsaac Funeral Home, 61 Pleasant St., with Mass of Christian Burial on Monday, December 14 at 11:00 am in St. Ninian Cathedral, Rev. John Barry presiding.  Donations may be made to Chalice, the Antigonish Community Food Bank, or a charity of your choice. A video recording of the funeral will be available after the service at www.MacIsaacs.ca.

Mass of Christian Burial for Mary A. Barry

Rev. John Barry, nephew and Godson of the deceased

Prayer of the Faithful – Mairead Barry