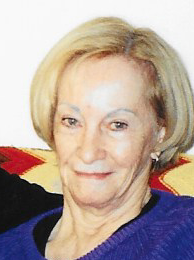 Theresa Agnes MacMaster, aged 85 of Antigonish, passed away peacefully on December 22, 2020. Born on March 6, 1935 in Jimtown, Antigonish County, Nova Scotia she was a daughter of the late Hugh MacMaster and Theresa Elizabeth (Smith) MacMaster. Theresa is a sister to eight other siblings, six sisters and two brothers.

She lived most of her life in Antigonish working in various industries. Over the years she was employed as a Nanny, a cook in some local restaurants, and also worked in the motel and hotel industry for many years.

Theresa had many interests during her life. She loved to travel, take long walks on the beach, having pets and enjoyed wildlife, and also was an incredible baker.

She always said her biggest accomplishment was having her own family. In her twenties, she met and later married John Francis Sears, who had four children. Over the years they had four more children, three boys and one girl.  Son, John Sears and wife (Lisa) Antigonish; Son, Paul Sears and wife (Edwina), Truro; Son, Robert Sears, Antigonish, and daughter, Elaine and husband (Chad) of Truro. Two grandsons, Rodney Sears, Antigonish and Michael MacPherson, Edmonton, Alberta.

Theresa will be greatly missed, she was a loving mother and grandmother.

There will be a private family Celebration of Life on December, 30th in Antigonish, Nova Scotia.

Donations in Theresa's memory may be made to Dementia or Alzheimer’s Association of Nova Scotia. Online condolences or donations may be made by visiting www.MacIsaacs.ca.

Many thanks to the funeral home and anyone else that participated in the service.

Share Your Memory of
Theresa
Upload Your Memory View All Memories
Be the first to upload a memory!
Share A Memory
Plant a Tree