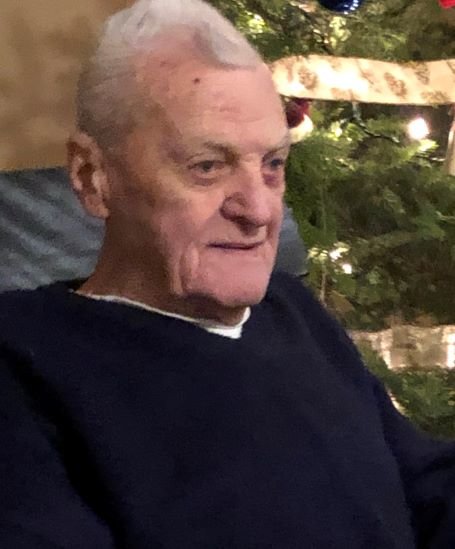 John Landry, age 93 and lifelong resident of Antigonish, passed away on June 4th at home with his wife of 64 years by his side. Born in Antigonish on September 6, 1927 he was the son of the late William E. and Margaret (Fraser) Landry.

In his formative years, John lived on Court, Pleasant, Elm, and St. Mary’s streets, and was a fixture playing hockey on the salt ponds. He worked for his father at the original Capital Theatre and the Celtic Hall. In 1944, he joined his brother, Kenna on the Canadian Merchant Navy troop ship, The Lady Rodney, as a young message runner. In the following year, he returned to Antigonish and worked for Chisholm Brothers’ Construction, later Elm Construction. He then began in 1946 at the new Keltic Motors in the Parts Department and was a committed worker for 47 years, 25 as Manager.

John was knowledgeable and well-read, with an interest in local history and genealogy. He passed a love of learning on to his children. He shared his love of the outdoors with his family, and created memories skating on the backyard rink and enjoying summer fun at the cottage at Seabright.

Following in both his father’s and grandfather’s footsteps, John was an active member of the Antigonish Fire Department for 46 years and was named an Honorary Life Member. A dedicated volunteer, at the sound of the siren, he responded promptly in full gear. John enjoyed the camaraderie of his fellow firefighters. He was an avid hunter, fisher and beachcomber. He looked forward to excursions with Kenny Odgie, The Painter, Neima or Sweet, especially to Ocean Lake, and always had an interesting story to tell when he returned home.

An exceptionally organized man and talented vegetable gardener, John knew where every item was in his barn. He always cut the grass and piled his wood in straight rows.

Each of John’s grandchildren, whom he adored, can mimic his furrowed brow ‘Papa look’. In his last years, with his ability to do physical work limited, John wanted nothing more than to make sure Bernadette was ok, to be surrounded by his family and to have a full oil tank.

We will miss you Dad. Your work here is complete. Rest assured, there is plenty of oil in the tank and nothing to worry about.

Family flowers only please. Memorial donations may be made in John’s name to a charity of your choice.