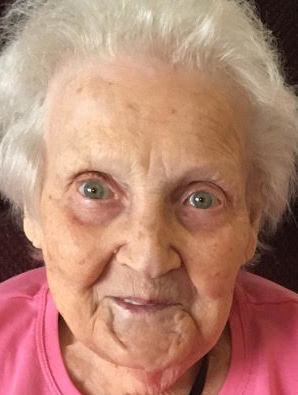 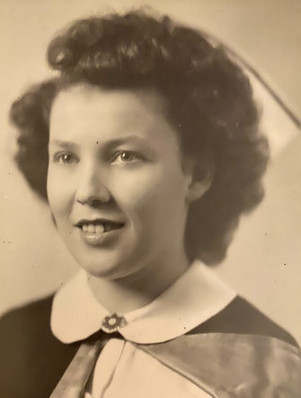 With great sadness we regret to announce the passing of Mary Florence MacDonald Gillis on Sunday July 11th 2021 at Parkland Antigonish. She was born In Sydney on September 20, 1925 to parents Nora (Hart) and Martin W. Gillis. The eldest of 10 children, Flo spent her formative years in Grand Narrows and Iona. Flo graduated from St Martha’s School of Nursing in 1946 and went on to lead a career at St Martha’s Hospital in Antigonish.

Faith in God, family, and unwavering service to others were the values that guided Flo throughout her life and which she nurtured in her family.

Mom was born on September 20, 1925 in Sydney to First World War veteran Martin William Gillis and Nora (Hart) Gillis who worked as a telegraph operator. Mom’s father was a station agent for the Canadian National Railway and was posted in Riversdale (outside Truro), Boisdale, Grand Narrows, and Iona. Mom’s formative years were spent in Iona living with her family at the station house. They enjoyed skating on the frozen Bras D’Or lake and during one winter she and her sister fell through the ice. They were saved by a local man. Many years later he and Mom were reunited in a heartwarming chance encounter at the Highland Village Day in Iona.

At the age of 17, Mom boarded the train from Iona and travelled to Antigonish to attend St Martha’s Hospital School of Nursing. She graduated in 1946 – the yearbook described her as a “real Cape Bretoner” with “spontaneous laughter and a winning smile”. Mum often told the story that during her time at the nursing school one of the sisters of St Martha thought she would make a good nun and tried to convince her to join the order. Although Mom’s faith was strong, she was not interested in being a nun so would run and hide whenever the nun came looking for her.

A year after graduating Mom married our father, LeRoy MacDonald, a star hockey player who first took an interest in her when she helped care for him after a hockey injury. They were married in North Sydney and lived in an apartment on St. Ninian’s Street while LeRoy’s father and brother built their new house on Highland Drive. The house quickly filled with children: Sharon, Gerry, Norma, Johnny, Joe, Carl, Martin and LeRoy. The years on Highland Drive were marked by car trips to her beloved Cape Breton to visit her parents and siblings, summers at the cottage at Bayfield, visits to the shrine at Monastery, and picnics and blueberry picking.

Mom stayed home with the children until the youngest was in school then she restarted her career at St Martha’s Hospital as a nurse. She worked as a nurse supervisor for many years and then in Central Service until her retirement in 1993. She nursed our Dad after his stroke until his death in 1997. Mom lost a son, Michael Gerard in infancy and in 1977 her son, John Leroy, was tragically killed in an industrial accident. Her strong faith supported her through these difficult times. Writing became an important way for her to express herself; she kept heartfelt journals and wrote wonderful letters to those who had moved away. Her letters included details about her daily life – what she had eaten for dinner, the weather, how everyone was doing – and were an expression of the love she had for others and for life. In later years, her letters were replaced by phone calls, always meaningful and evidence of her unfailing sharp mind and memory.

Mom was compassionate in her work as a nurse and in her life. She volunteered her time with many organizations including the Schizophrenia Society and the Red Cross. It was while volunteering at the Red Cross that she and Allan Gillis met and became a loving couple. They were married in 2000 and lived on Margaree Street, looking after their garden and enjoying time with their large extended families. Mom was a wonderful grandmother and was very proud of each of her 12 grandchildren and 9 great-grandchildren. After Allan died, Mom moved into the Parkland Residence at Bethany where she enjoyed her final years surrounded by love from family, staff, old friends, and former neighbours. She especially enjoyed spending time with her close friend, Donnie MacDonald, whose great sense of humour matched her own.

Family flowers only. Donations may be made in memory to Canadian Red Cross.

Share Your Memory of
Florence
Upload Your Memory View All Memories
Be the first to upload a memory!
Share A Memory
Plant a Tree