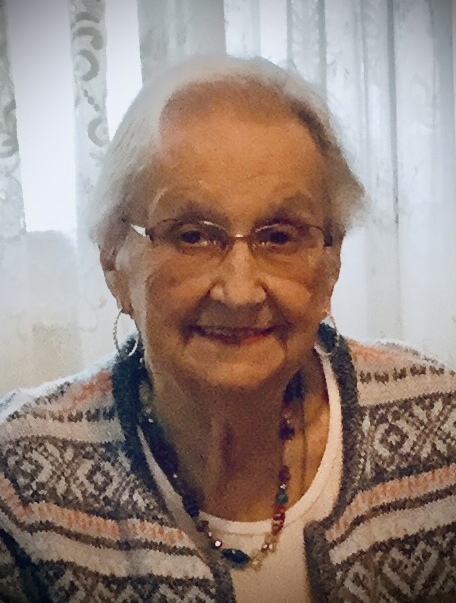 Charis Marie Slauson(Stahl) of Amherst, N.S. passed away peacefully on Saturday, November 5, 2021 in the R.K. MacDonald Nursing Home, Antigonish, N.S. Born in Margaretsville, N.Y. on May 2, 1927, she was the daughter of the late Melvin Stahl and Malvina (Mann) Stahl.

Charis grew up on the family farm in Halcottsville, N.Y., getting married to Milton and raising her family in Roxbury, N.Y. before moving to Minto, N.B.,Canada in 1969 and later settled in Amherst, N.S. in 1971. Not a skier so when hubby and the three kids started spending every weekend at Patterkill Ski Hill she decided to get a job at the hill and join them. In Amherst, hockey was the new love, the Junior Ramblers and the Bantam Ramblers. She worked alongside Milton, videotaping the games when this became the new genre. Camping with the kids, and later with the grandkids, was a passion with them. Later in life, golf became their love. Saturday morning yard sales in Amherst was never an event to miss.

Charis loved to knit and when it became popular, everyone got a Mary Maxim sweater. She was known as the Cabbage Patch Lady in Amherst where she would repair these dolls and give to those who otherwise couldn’t afford. She loved playing cards and doing puzzles. Christmas was a special time for Charis and every effort was made each year to return to her hometown and spent Christmas with her mother, brothers, grandkids and nieces and nephews. Baking her ‘sticky buns’ was always anxiously awaited.

Cremation has taken place. There will be no visitation or service in accordance with Charis’ last wishes. Her ashes will be taken to New York, at a later date, for a family goodbye.

The family would like to extend their sincere thanks and gratitude to the staff at the R.K. MacDonald Nursing Home and Doctors Steeves and Hickey, for their kind, compassionate and professional care. Donations may be made to a charity of your choice in memory of Charis.

Share Your Memory of
Charis
Upload Your Memory View All Memories
Be the first to upload a memory!
Share A Memory
Plant a Tree