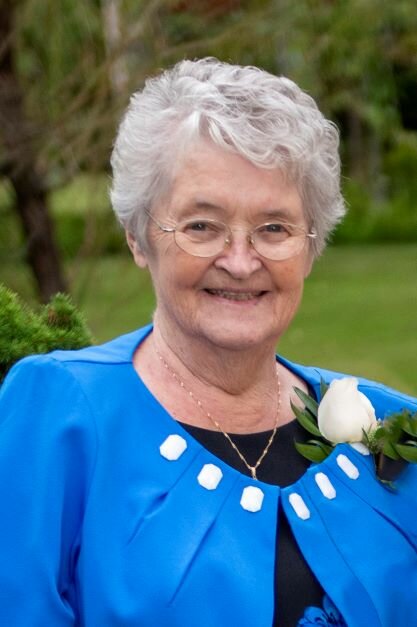 The family of Bernice Keay are saddened to announce her passing on April 15, 2022, at the Cape Breton Regional Hospital, Sydney NS.

Bernice was born on August 22, 1937 in Antigonish and was a daughter of the late Joseph and Margaret (MacDonald) Rogers.

Bernice was raised in Heatherton and was a teacher prior to raising her children.  She then worked as a secretary at both a medical office and St. Ninian’s Parish and later for the provincial government.  Bernice was a woman of faith, an active member of the CWL and served as a president for a term.  She was also a Martha’s Associate with the Sisters of St. Martha.

Bernice spent her summers at the cottage in Heatherton with family, while enjoying gardening in the country air.  She was a true matriarch and was devoted to her children, grandchildren and great grandchildren taking much joy in their accomplishments.  Bernice had a large extended family and always had an open door for them in her home.  She enjoyed her last few years at Parkland Antigonish where she was an avid card player.

Visitation will be held on Wednesday from 2 to 4 and 7 to 9 pm in MacIsaac Funeral Home, 61 Pleasant Street, Antigonish. Funeral Mass 11 am Thursday in St. Ninian Cathedral, Rev. Dan MacLennan presiding.  Burial in St. Ninian Cemetery. Family flowers only.  Donations may be made to a charity of your choice. Attendees, at both the wake and funeral, are requested to wear face masks. Online condolences: www.MacIsaacs.ca

Share Your Memory of
Bernice
Upload Your Memory View All Memories
Be the first to upload a memory!
Share A Memory
Plant a Tree