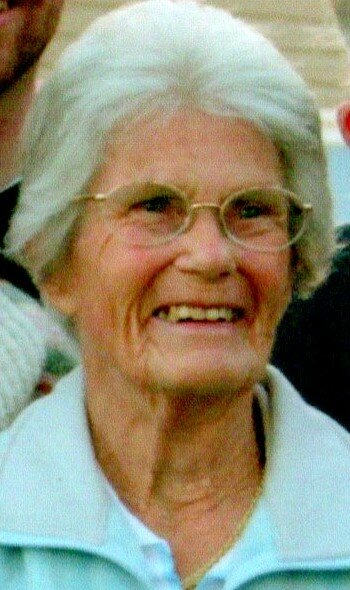 It is with heavy hearts that we announce the passing of our mother, Helen Barbara MacGillivray, in the early morning hours of April 16, 2022.

Born in Greenfield, Massachusetts on August 18, 1925, the daughter of the late Barbara Emma (Patch) and Walter John Kelly, she grew up in Sydney, Cape Breton until she attended St. Martha's Hospital School of Nursing in Antigonish to pursue a career in nursing, graduating in 1945.

Shortly after, she married Ronald F. (Pud) MacGillivray, raised a family of five children, always teaching and showing by example the importance of Family, Home and Community. Helen enthusiastically supported the activities of all her children, and later, those of her grandchildren and great grandchildren. She enjoyed knitting for all of them, attending their sporting events, often seen walking around town doing her errands, and in later years loved her almost daily coffee outings at A & W with friends, especially Dianne Kell.

Visitation will be held from 2-4 and 7-9 pm Thursday, April 21, 2022 in MacIsaac Funeral Home, 61 Pleasant St., Funeral Mass 11 am Friday in St. Ninian Cathedral, Rev. Dan MacLennan presiding. Attendees are requested to wear face masks to both visitation and funeral.  In lieu of flowers, memorial donations may be made to St. Martha's Hospital Foundation - Palliative Care or the Antigonish Community Food Bank

The family expresses our sincere gratitude to the caregivers - without them Mom could never have stayed home, which was her dearest wish. Special thanks to Lori Spinks and Renee Stubbs! Also, this was accomplished through the constant guidance of Dr. Chiasson, Dr. Rice of Palliative Care and the VON, to whom we are forever grateful. www.MacIsaacs.ca

Share Your Memory of
Helen
Upload Your Memory View All Memories
Be the first to upload a memory!
Share A Memory
Plant a Tree