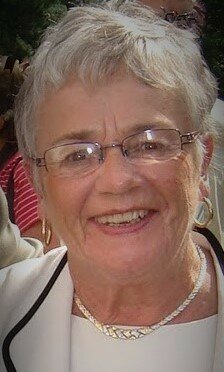 We are heartbroken to announce the passing of our beloved Mother, Merle Cameron (Gouthro) on June 11th, in the Victoria General Hospital in Halifax, NS – surrounded by her loving family.

Merle was born in Glace Bay, Nova Scotia, and grew up in Reserve Mines – Centreville Street – or as most know it – Rabbit Town.  She was the daughter of Maurice (“Owie”), and Majorie Gouthro.

Mom was a proud Cape Bretoner and loved spending her time in the summer and at Christmas with her loving siblings and parents in Reserve.  There were many late nights, filled with cards, music, laughter and love (and sometimes a bit of moonshine), followed the next morning with Nanny Marge’s freshly baked homemade bread.  We all share wonderful memories of a lifetime of a very close and special family…the Gouthro's.

Merle left Cape Breton at an early age to attend the NS Normal College (later called the Nova Scotia Teachers College).  It was there that she met her husband of 55 years, Berkley Cameron.  Berk was very proud to have Merle by his side – “Merle the Pearl” as his brother’s and friends affectionately called her.  Berk always commented that he married the Winter Carnival Queen of his college and former Miss Cape Breton! After much fun at Teacher’s college, Berk and Merle settled in Antigonish, and raised four children, Wendy, Rollie, Michelle and Robert.  Many often commented that Berkley was her 5th child!

Merle had a 35 year career as a teacher in Antigonish.  She was a much loved and respected teacher who was very dedicated to all of the many students that passed through her classrooms over that time.  There were many calls made towards the end of August from parents to MacPherson Elementary, trying to get their children into “Mrs. Cameron’s” class for the upcoming year.  Merle met many lifelong friends over those years at MacPherson as well.

While Merle loved her Cape Breton roots, Antigonish became her home.  She and Berkley made a home at 65 Brookland Street that was always full of friends and laughter.  The door was always open at 65 for all of her children’s friends as well, and she would often do a headcount on Saturday and Sunday mornings to see who stayed the night.  Merle always made sure that everyone was well taken care of and had full bellies. She made the most amazing meals, and her spaghetti and meat balls were world famous!!!  It was Merle’s last wish to stay in her home at 65 Brookland until the end – and that is what she was able to do – with a lot of help from the Antigonish community, her close friends, Bernadette MacDonald and especially Sylvester MacNeil – who was so good to her.

Merlage – as some people affectionately called her – had many hobbies.  She was an avid golfer of 35 years – but only broke 100 – once!!! She was always picking away at a crossword puzzle, loved to read – and especially loved to play bridge with her beloved “Bridge group”.  Those ladies also knew how to have a good time!

Like her boys, Merle was also a long suffering Toronto Maple Leafs fan. Next year is our year.

But, Merle’s greatest love was her family.  It has been written many times before we can imagine, but it was never more true than with mom.  She was the most amazing mother that children could ever have hoped for.  We were honestly the luckiest children in the world to have Merle Cameron as our mother.  She loved all of our family get-togethers, and we had plenty!   But the “all inclusives at Cribbon’s beach” became her favourite times later in life.

Merle was so loving and caring, and most of all patient.  She was the rock of our family and we will never be the same without her.  She adored her grandchildren and loved hearing all about their life events, sports and school.  They became her everything.  And they loved their “Nanny Merle” so much.  Nanny loved playing cards with her grandchildren, and exploring Berk’s garden with them.

She loved all of her nephews and nieces dearly, and cherished their visits to 65 Brookland street for a home cooked meal, or one of Berk’s famous Caesars.

Our family would like to say a special thanks to Sean and Emmy Cameron for the delicious meals they delivered most evenings for the past number of years.  This show of love and support allowed mom to be where she wanted to be for as long as she could, in her home.  She looked forward to these meals and would tell us all about them in our nightly phone calls home to mom!

Also, our sincere gratitude to the nurses (especially Katie and Alvera) and staff at 6A at the Victoria General Hospital.  You treated our mother with great care and respect in her lengthy stay at the hospital.

Merle was pre-deceased by her loving parents Maurice (Owie) and Margaret (Marjorie) Gouthro.  Her husband Berkley – who adored her for over 55 years, also passed away six years prior. She was also predeceased by her best friends and brothers, Servine, Maurice (Moe), Blaine and Shaun, and her nephew Billy McLean.

In lieu of donations, because our mother was such a kind and caring human being, we would ask that you do something kind for someone that may need it, in her honour.

We will miss you so much Mom Mom.

Share Your Memory of
Merle
Upload Your Memory View All Memories
Be the first to upload a memory!
Share A Memory
Plant a Tree