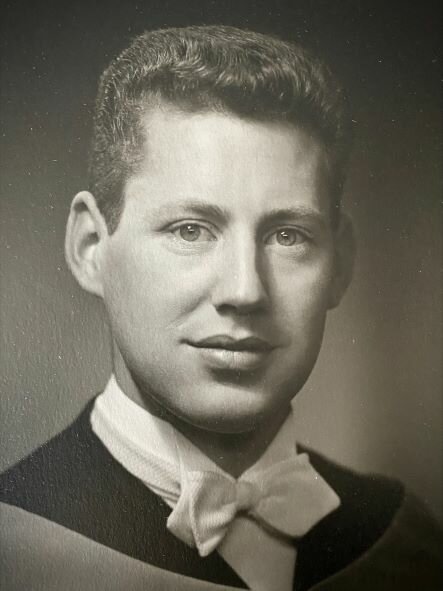 A Cape Bretoner by birth, his early years were in Judique, before Vernon and his family moved to Bridgewater, Nova Scotia. It was here, near the ocean, where his humble, down-to-earth Maritime sensibility was first formed. The son of Alan A. and Sophia (née MacDonell), he had a rare ability to relate with people from across the communities he lived. Throughout his life, he demonstrated his belief in treating everyone with honour, respect, and grace. Personal traits he expected of his children over the years.

Upon graduating from the College of Optometry of Ontario at the University of Toronto, he married Ann Marie (née MacEachern) in 1961. He first practiced in Halifax and four years later, they moved to New Glasgow where his professional life as an optometrist thrived.

An entrepreneur at heart, Vernon opened a second office in Antigonish, co-owned a manufacturing plant and launched other retail companies throughout his life. He worked hard to support his family and was dedicated to making the community he lived a better place for all.

He served the community for nearly four decades as the local eye doctor, was a proud Rotarian, and served on the Board of Governors and the Alumni Association at St. Francis Xavier University.

Although deeply involved in community life, Vernon’s first love was his family. His favourite moments were spent with his wife Ann and their four children, especially at the family farm in Little Harbour. Over the years he hosted guests from across Canada at “The Farm”, including hundreds of students from his beloved St. Francis Xavier University where he completed his undergraduate studies.

In his last days, he continued to live with dignity and respected all those around him. When asked how things were going, he regularly said to his guests, “It’s all good…”.

We cannot adequately express our gratitude for the love, tenderness and compassion shown by the staff at the R.K. MacDonald Nursing Home. They treated our father like a member of their family, as he felt about them. The medical advice and support provided by Dr. David Cudmore was exemplary, personal, and deeply appreciated.

Funeral mass will be held at 11:00 am on Monday June 20 in St. Ninian Cathedral, Antigonish, 121 St. Ninian Street. A reception will follow in St. Ninian Place located at the same address.

To those closest to him, he was Dad and Papa. His burial will take place at St Ninian’s Cemetery and celebration of a life well lived will take place in Antigonish later this summer.

Share Your Memory of
Dr. Vernon
Upload Your Memory View All Memories
Be the first to upload a memory!
Share A Memory
Plant a Tree