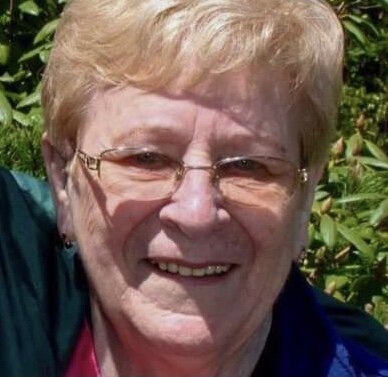 It is with heavy hearts that we announce the passing of Anna Geraldine (Geri) Farrell, 89, of Antigonish, Nova Scotia. Geri passed away peacefully on July 18, 2022, with her loving family by her side. Geri was born in Glace Bay, Cape Breton, and was the chosen daughter of the late Joseph Long and Sarah (Gillis) Long of Glencoe, Guysborough County.  She is preceded in death by beloved husband and best friend, Patrick Farrell, his parents, West and Mary Ellen Farrell, and extended family members, Margaret and Edward Farrell.

Geri was a cherished wife, mother, nana, sister, and friend to the many people who were blessed to know her. She was married to the love of her life for 61 years and missed him every day that he was not by her side. She raised six children, many grandchildren and great grandchildren, and was a caregiver to many other children over the years. Her biggest passion in life was her family. Geri’s door was always open to visitors, and she could always be counted on to have the kettle ready, a fresh batch of biscuits out of the oven, and an ear for anyone needing support and reassurance.

In her later years, Geri connected with and deeply appreciated contacts with her birth mother, Helen Yorke, and family members, Irene, Rose, Irma and Charlie and his wife, Natalie. Geri is deeply missed by sisters-in-law and close friends, Lillian, Rose, Mary Agnes, and Hattie. In fact, evening visits with Geri were always arranged around her nightly phone calls with Lillian. She found great support in the stories and laughter shared on a nightly basis.

Visitation will be held from 2-4 and 6-8 Thursday, July 21st in MacIsaac Funeral Home, 61 Pleasant St., Antigonish. Funeral Mass 10 am Friday in St. Ninian Cathedral, Rev. Danny MacLennan presiding. Burial in the parish cemetery.  In lieu of flowers, donations may be made to the Make A Wish Wish Foundation of Canada or the Palliative Care Unit at St. Martha’s Regional Hospital.

The family wishes to thank the many caring staff of St. Martha’s hospital who interacted with Geri over these last few months. She was deeply appreciative of the wonderful RNs, LPNs, CCAs, and all other staff who brightened her day.

“The heart of our family”

Share Your Memory of
Anna
Upload Your Memory View All Memories
Be the first to upload a memory!
Share A Memory
Plant a Tree