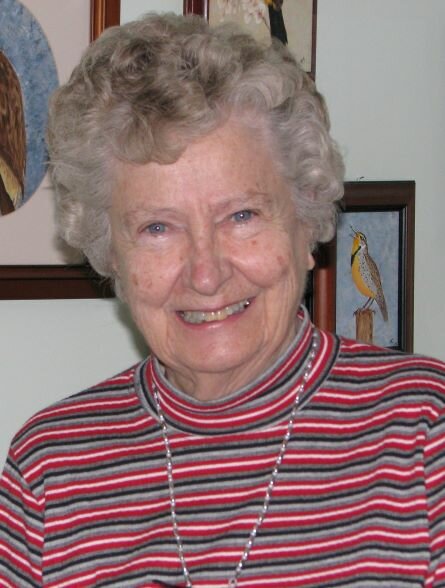 Audrey Irene (Connor) Chiasson, 98, of Antigonish passed away on November 26, 2022 in the RK MacDonald Nursing Home. Up until the past two years, Audrey was healthy and happy and an active member of the community.

Audrey was a graduate of St. Anne’s School, Glace Bay; Mount St. Bernard Secretarial College, Antigonish and St FX University, Antigonish '75. She married Joe in June, 1947 and together they raised their family in Glace Bay, Sydney, Lesotho, Saskatoon, Halifax and Antigonish. She was always keen to try new things and was never daunted by the challenges of new places and cultures.

Over the years, Audrey wore many hats. She was a Master Tutor Trainer with the Laubach Literacy organization,  President of St Rita’s Hospital Aid in Sydney, Girl Guide leader, student co-ordinator at Coady International Institute, Spiritual Director and active member of the Tri-county Cursillo movement, volunteer of nine years at the RK MacDonald Nursing Home and St Martha’s Hospital. While living in Halifax, Audrey was a Religious Educator and Co-ordinator for the primary level, teaching both teachers and children. She also sat on a number of Arch-diocesan committees.

Mom’s spiritual life was most important to her. She was a member of the Third Order of Carmelites for two years and later an Associate Member of the Congregation of Notre Dame. Under the direction and guidance of the Jesuits, she received training as a Spiritual Director and she often conducted private retreats at her own home as well as assisting with spiritual direction at Bethany Retreat Centre in Antigonish. She was a Eucharistic Minister at St. Ninian’s Parish for 50 years. She sponsored many third world children through Chalice and World Vision.

Music was a huge part of Mom’s life. She taught piano for many years in her own home as well as music appreciation and singing in schools. As a family she gave us the gift of music and it wasn’t unusual for us to gather around the piano for a sing song on Sunday afternoon. She would often find current music as well as old favourites, war songs, hymns and classics to keep us singing. Car trips, doing dishes, campfires were often accompanied with music. She loved a good party and blessed us all with a music gene.

Mom loved to paint and especially enjoyed painting birds. She had an exhibition at the Antigonish Library when it was first opened. She also loved to play pool and bridge as well as enjoying many other cultural activities wherever she lived. She was loved by many and was a great collector of hugs and laughs! Thank you to all who helped her so much especially in the last few years.

Charitable donations may be made to the RK MacDonald Nursing Home, Chalice Canada or the St Vincent DePaul Society of St. Ninian’s Parish.

Share Your Memory of
Audrey
Upload Your Memory View All Memories
Be the first to upload a memory!
Share A Memory
Plant a Tree