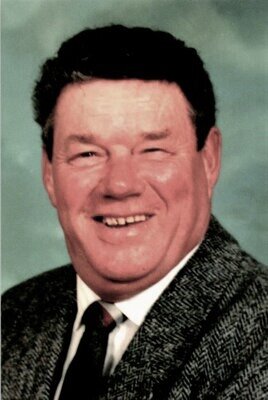 It is with heavy hearts we announce the passing of our dear father, James (Jim) Ralph Neary, (aka "The Colonel" to many) on Tuesday December 27, 2022 in St. Martha's Regional Hospital, with his family by his side.

Born on April 7, 1933, Dad was the leader of the pack of 17 siblings. He was the loving son of the late Miriam (Hanrahan) and Ralph Neary.

As a young man from Fairmont, Antigonish County, Dad joined the Highlander Reserve Unit in Sydney, N.S. in 1952. It was there he met our mom, Jeanette (aka Peaches). On January 5, 1953 they wed. He enlisted in the Canadian Armed Forces in Halifax on April 30, 1954. Dad's basic training took him to Chilliwack, British Columbia, and it was there he joined the Royal Canadain Engineers. Postings took him to numerous bases in Ontario. His last post was in Camp Debert, Nova Scotia. Dad's military service included many duties such as Camp Desert Rock, Nevada, USA; security during the FLQ crisis and serving for HRH Queen Elizabeth II in St. John's, Newfoundland.

In 1982 dad and mom retired to dad's home in Fairmont after serving 32 years in the military. It was in Fairmont they purchased their home where dad enjoyed his horses, his shop he tinkered in and most of all, his family. Dad's love for horse pulls, hunting and fishing was immense. Dad was a member of the Arras Branch 59 Royal Canadian Legion Antigonish for over 40 years and the Antigonish/Guysborough Draft Horse Association. Dad always enjoyed visits from his children and grandchildren whether from here or away. He loved a good joke, a good feed of fish or moose meat (fried with mushrooms and onions). He loved his Irish roots, he told many stories of his ancestors. Dad had a great memory could recollect a quote or tell a joke he would have heard while in the military - his mind was very sharp. He leaves many cherished memories behind.

A huge thank you goes out to all the nurses and doctors in the Palliative Care Unit for your utmost care of Dad, VON Antigonish, family doctor William Booth for taking such good care of Dad for all these years, and also to Veterans Affairs Canada.

Visitation will be held from 2-4 and 7-9 pm on Monday, January 2, 2023 in MacIsaac Funeral Home, 61 Pleasant Street, Antigonish. Funeral Mass will be held at 11 am on Tuesday, January 3, 2023 in St. Ninian Cathedral, Rev. Danny MacLennan presiding. Burial in St. Ninian's Cemetery at a later date. Donations in memory may be made to Antigonish Palliative Society or the IWK Hospital, Halifax.

Share Your Memory of
James
Upload Your Memory View All Memories
Be the first to upload a memory!
Share A Memory
Plant a Tree