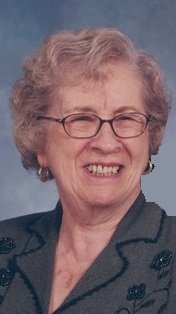 Rita worked for Bell Telephone's business office until her marriage to Sandy Ross in 1951. Rita and Sandy moved to Montreal where Sandy worked with the Bank of Nova Scotia until 1954. Son Allan was born in 1954 in Ottawa and shortly thereafter all moved to Antigonish NS where Sandy accepted a job with the Bergengren Credit Union. Daughter Pasty was born in Antigonish in 1958. Rita used her time to volunteer with many community organizations, such as St. Martha's Hospital Auxiliary and the CWL "Fall Fair". She was also a money counter (affectionately referred' to as "the holy rollers") with St. Ninian's Cathedral.

Rita's legacy is certainly her baking. In the early 1970's Rita started making wedding and birthday cakes. This continued for many years, as she probably made a cake for just about everyone in Antigonish. Rita's positive attitude went with her in all aspects of her life.

Besides her parents, Rita was predeceased by her husband Sandy (2016). She is survived by son Allan (Denise), Calgary and daughter Patsy, Halifax, grandchildren, Liam, Callum, John and Kathleen. She is also survived by her only sister, Lois, Ottawa.

Visitation will be held in MacIsaac Funeral Home, 61 Pleasant Street, on Wednesday, June 12 from 2-4 pm only. Funeral Mass, Thursday, June 13 at 11:00 am in St. Ninian Cathedral, Antigonish, Rev. Donald MacGillivray presiding. Burial of ashes at a later date in St. Ninian Cemetery. Donations may be made to St. Martha's Regional Hospital Foundation. www.MacIsaacs.ca

Share Your Memory of
Rita
Upload Your Memory View All Memories
Be the first to upload a memory!
Share A Memory
Plant a Tree