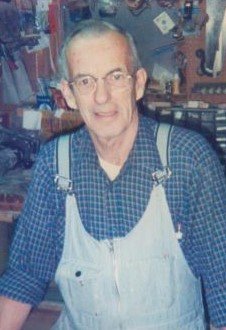 Albert Ronald MacEachern, 82, of Cape George passed away peacefully in St. Martha’s Regional Hospital, Antigonish on Thursday, September 18, 2019. Born in Antigonish he was a son of the late Alex and Ruth (Conrad) MacEachern.

Albert, a lifelong resident of “The Cape”, was a fisherman and a wooden boat builder. Boat building began at an early age with his father who taught him the love of boats. When he retired he began making model boats and lighthouses. Many of his model boats and lighthouses were purchased by tourists and locals alike and can be found in many parts of the country and beyond. He loved interacting with people who would stop to admire and buy his works.  He was a volunteer firefighter with the North Shore Fire Department and served as Harbour Master for many years at Ballantyne’s Cove. Albert was a quiet man and had a zest for life despite life’s hardships. Most of all he enjoyed spending time with family, especially his grandchildren and great grandchildren, whom he loved dearly.

He will rest in MacIsaac Funeral Home, 61 Pleasant St., Antigonish on Sunday from 2-4 and 7-9. Funeral Mass will be held on Monday at 10 am in Holy Rosary Church, Cape George, Rev. Andrew Boyd presiding, burial in the parish cemetery. Memorial donations may be made to the St. Martha's Regional Hospital Foundation. www.MacIsaacs.ca

Share Your Memory of
Albert
Upload Your Memory View All Memories
Be the first to upload a memory!
Share A Memory
Plant a Tree