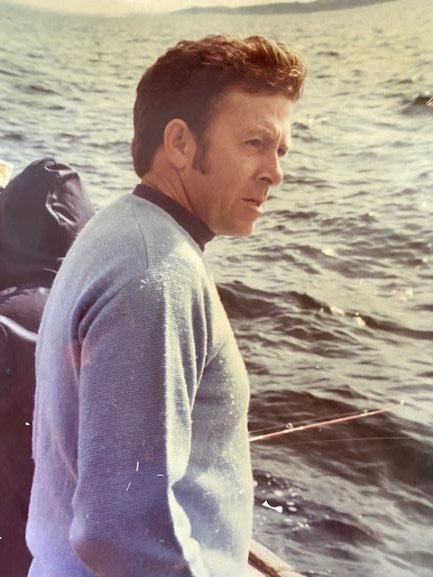 He saw in them himself: The scrawny 5’6 boy who set up a pole vault pit in his backyard, the kid who stole rides on passing street sleighs from Hawthorne to unknown “downstreet” locations; the boy, too, who danced for nickels at the corner of Main and Sydney streets. The sheer joy and delight in life of his grandchildren and great grandchildren became his again.

Although he wanted us to mention that he once was the vice president of Antigonish Wholesalers Ltd., what we think is more remarkable is how well he adapted when it went under. He worked for his son-in-law, and at almost sixty was throwing bags of feed around that were close to his own weight. When that chapter ended, he worked at the Food Bank. He only hung up his work gloves in his mid-eighties. That resourcefulness is something he has bequeathed to all of us.

He would be disappointed if we did not mention his athletic prowess. He was a fabulous tennis player, curler, a great golfer and badminton player (we can hear him saying. . . what about “ball’?). The only thing he liked better than playing sports was telling you about it afterwards. We may have yawned our way thru it then; but we would do anything to hear it just one more time.

Jack always had to have one for you. And by that we mean he always had to have a new joke — the spicier the better of course. (And he expected you to have one for him, too.) His repertoire was substantial. One of Jack’s other great achievements was that despite living on his own for almost 35 years, he avoided putting together anything that could be fairly called a meal. Tim Horton’s and Swanson’s will miss his patronage.

We already miss you Dad, but we will carry you around with us; and our children and our children’s children will carry you with them, too. You are part of them as much as they are part of you. You did all you could for all of us. And not just for us, but for friends and acquaintances and people unknown to us. We are very proud of you Dad, and though our hearts are heavy at this moment, they are immeasurably larger and fuller because of you being in it.

Visitation, with social distancing measures in place, will be held on Monday June 22 from 4:00-6:00 pm in MacIsaac Funeral Home, 61 Pleasant St. A private family Funeral will be held in St. Ninian Place, Rev. Donald MacGillivray presiding. A video link of funeral mass will be available here on Tuesday. Donations may be made to the Antigonish Community Food Bank. Online condolences may be made by visiting www.MacIsaacs.ca

Share Your Memory of
Jack
Upload Your Memory View All Memories
Be the first to upload a memory!
Share A Memory
Plant a Tree