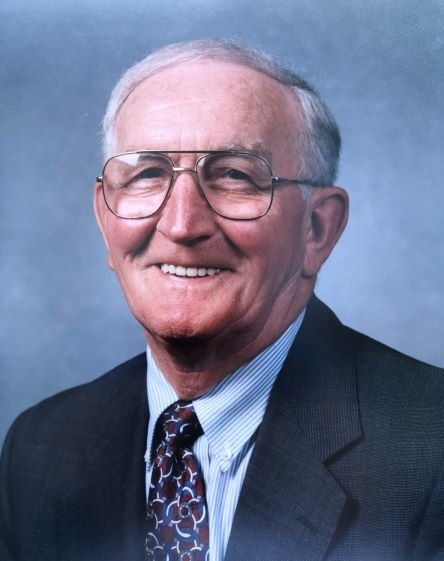 It is with great sadness that we announce the death of Donald Alexander Barry of Antigonish.

Born in Antigonish in May, 1924, the son of Peter Barry and Annie Beaton, Donald grew up sailing in Antigonish Harbour and playing rugby and hockey. He spent many happy summers with his mother’s family in Mabou Harbour Mouth, Cape Breton. His parents brought him to Christmas midnight mass as an infant of seven months; he was proud to have continued this practice for 97 years. He was devoted to the Cathedral Parish of St. Ninian for decades as a server, usher and lector. He was a graduate of St. Francis Xavier University, B.A. (1947), Master of Adult Education (1971). Happily married to Mary (nee MacDonald) since 1949, he was first and foremost a man devoted in service to his family, his religion and his community.

Long a student of the teachings and values of the Antigonish Movement, he worked for the Nova Scotia Credit Union League in both Halifax and Antigonish. His interest in social justice movements and adult education led to roles as an instructor on Credit Unions at the Coady International Institute as well as an instructor for overseas seminars.

Following his return to academic studies in 1970 at St. F.X. for a Masters in Adult Education, he served with the Department of Education, Province of Nova Scotia in the Continuing Education Program in Truro and Antigonish.

As a volunteer, Donald also served as Director of the Braemore Co-operative Limited; Member of the Board and Chair of the Bergengren Credit Union for ten years and Director and Chair of the Credit Union Central of Nova Scotia. He was appointed by the Governor in Council to become a member and later the chair of the Nova Scotia Credit Union Deposit Insurance Corporation, which he served for nine years. His contributions were recognized when he received the Distinguished Co-operator Award, given to those who have demonstrated outstanding achievement and service to the Nova Scotia co-operative movement.

In his retirement years, Donald continued his work with Credit Unions as well as working as a weekly volunteer at the Antigonish Food Bank.

Together with his wife Mary, he was a strong supporter of the Antigonish Clan Donald Society and both were recognized by that organization with a joint achievement award. He was recognized by the Town of Antigonish as Citizen of the Year. In 2001 he and Mary were co-recipients of a leadership award as one of Nova Scotia’s Most Remarkable Seniors.

Donald was a long-time and active member of the St. Ninian’s Conference Society of St. Vincent de Paul as well as a Fourth Degree Member of the Knights of Columbus, past Grand Knight and Faithful Navigator. He served as the Secretary of the Antigonish Diocesan Society for 26 years.

We lovingly remember him for his quick wit, his quiet devotion to his community, and as a talented carpenter. Donald took pleasure in spending time with friends, joking at Oak Manor, sitting in “critic’s corner” at the arena and getting together with the Romeos for lunch. He spent many years building and tending the family cottage at Arisaig, gardening, and with Mary enjoying their large extended family.

Memorial donations may be made to the Antigonish Food Bank or the Society of St. Vincent de Paul.